What You’re Made Of ‘The Real Boy,’ by Anne Ursu

Anne Ursu, the author of “Breadcrumbs,” has written a lovely and sophisticated new middle-grade fantasy that asks readers to wrap their heads around abstractions and accept a lack of absolutes. There is no one bad guy, people are simultaneously greedy and miraculous, and even a monster deserves understanding. In “The Real Boy,” magic is unruly, and legends feel steady under the feet until a new bit of information rolls in like thunder and unsettles history. 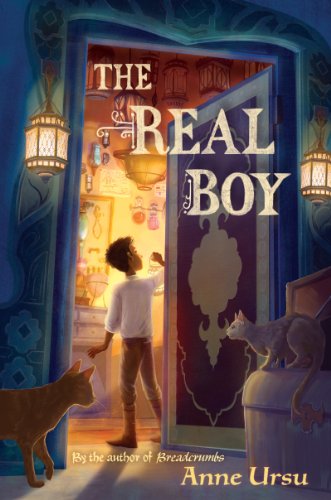 Eleven-year-old Oscar is a hand to Master Caleb, the “first magician in a generation,” on the island of Aletheia. The “odd” boy’s quiet life is dictated by routine, which suits him just fine. He collects flowers and herbs for his master to make into charms and potions to sell to the inhabitants of the Barrow Village and the privileged people from Asteri, “the Shining City.” He spends the rest of his time avoiding the cruel apprentice, Wolf, taking care of a menagerie of cats and sneaking into the magician’s enormous library.

Oscar’s predictable life begins to fall apart when Master Caleb goes to the continent to sell his enchanted wares and Wolf is killed by something large and hungry in the woods. The adults of the Barrow don’t want to believe that a monster is attacking them, so Oscar and his friend Callie, the headstrong healer’s apprentice, must uncover the truth behind Aletheia’s magic on their own. Why was a terrible plague able to cause so many deaths years ago? Why did the wizards of old turn themselves into guardian trees? And why are the children of Asteri, who are supposed to be perfect, coming apart like paper dolls left in the rain?

Oscar — who has trouble looking people in the eye and reading emotions — is forced by Callie and by circumstance to help the sick city children. “I cannot understand what people mean when they talk,” he tells Malcolm, an ex-magician. “I am not . . . I’m not made of the same thing as everyone else.” But what sets Oscar apart (his methodical knowledge of plants, his ability to create “maps” of information in his head) also enables him to become a hero.

“The Real Boy” contains delicate allusions to “The Adventures of Pinocchio,” by the 19th-century Italian author Carlo Collodi (magical wood also plays a role in this story), and is rich with beautiful, heady notions that demand to be lingered over: If the earth can be saturated with enchantment, then a city can be scarred with grief. Magic is a natural force that “serves at no one’s pleasure but its own.” And truth “punches you in the stomach as it puts its loving arm around your shoulder.”

Readers will need to go slowly, both to savor Ursu’s descriptions and to avoid confusion. As Oscar and Callie try to understand their history and why Aletheia’s magic is losing strength, they develop and discard theories the way citizens of Asteri might throw away old charms, but those who stay with their mission will be aptly rewarded.

Ultimately, Oscar must make a daring and self-sacrificial effort to get rid of the monster for good. It takes an act of great bravery to free him from self-doubt. He goes from being a “puppet with no master” to a real boy indeed. In Aletheia, as in the real world, it turns out to be “a beautiful lie . . . that you could have magic without monsters.” And so destructively true that “small enchantments make us dream of big ones.” Perhaps, as Malcolm suggests, instead of relying on magic it’s better “we dream of a big world” — a world that has plenty of space for “odd,” unexpected heroes like Oscar.